Abstract: Land cover and land use of earth has significantly been changed by natural and non-natural reasons throughout time and the amount of this change, which has increased by the passing years, were determined by various studies. The areas most affected by this change are countries and the metropolitan cities, which are under pressures due to an unprecedented increase in population growth and developments as the result of urbanization and industrialization. There are several studies about the change of land cover in big cities through the years and different methodologies for detecting these change were performed. Istanbul is among the cities that have undergone a large amount of land cover changes because of various factors specifically urbanization and population growth. Urbanization phenomena with all its advantages for people, causes the large portion of land cover and land use change in big cities such as in Istanbul. Besides the urbanization, there are so many other factors, which should be considered and controlled carefully. Vegetation reduction in the areas, which occurred due to the development of city and new constructions, is one of the consequences of the global land surface change in highly urbanized countries and cities. Remotely sensed images and especially Landsat images with their long-term archive are the main sources in analyzing the changes happening both in the urban areas and vegetation covers. Classification of Landsat images are the mostly used and simple methodology for detecting the changes and checking the amounts of increase and decrease in the urban and vegetation classes. Vegetation indices are commonly applied intermediates for emphasizing the specific feature on the land cover such as vegetation, urban areas and soil environment. In this study, temporal changes occurred in the vegetation cover and built-up areas in mega city of Istanbul were determined by using the potential of the remotely sensed data and utilizing Normalized Difference Vegetation Index (NDVI), Soil Adjusted Vegetation Index (SAVI) and Built-up area Index (BU). Benefiting by pre-determined changed areas, in 150 changed areas (points) the relation between indices values were analyzed. Landsat 5 TM data images of Istanbul in June of 1984, 2002, 2007, 2009 and 2011 were used in this study. Land cover/use changes through the entire metropolitan area were determined. According to analysis in the built –up area between 1984 and 2011, the vegetation cover of the completed infrastructural residential areas increased considerably in last two years, 2009 and 2011, compared to 2007. This can be because of the reorganization of the vegetation cover with built-up areas. As the result of study, it can be asserted that indices generated by utilizing the multispectral feature of Landsat 5TM, which has the long-term archive of satellite images, can be used for determining the land cover/use changes. In addition, it is shown that various analyses can be done by exploring the relation between indices. 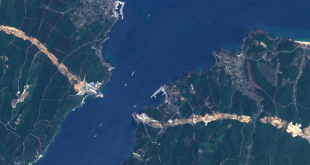